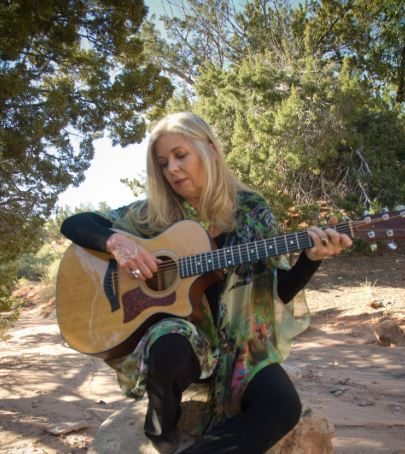 Although Susan Clark is an accomplished guitarist and pianist, it is her soulful voice that is perhaps her best instrument. As a seasoned performer and songwriter, she has released several albums of her own original compositions and has also performed on many album projects for other musicians. She has received numerous awards throughout the years from the Kerrville New Folk Songwriting Series, The National Folk Alliance, The New Mexico Music Awards and The Empower Music Posi Awards. Susan has been the featured artist on the nationally syndicated NPR show, The Art of The Song Virtual Coffeehouse. She was also honored to be the Music Director for the CSL Practitioner’s Expansion Summit which took place in Denver in October of 2016.
Susan served as the Music Director at The Rio Grande Center for Spiritual Living in Albuquerque for over six years. In February of 2016, she joined The Center for Spiritual Living Denver in the role of Music Director.

After three years of wonderful service at CSL Denver, Susan is stepping away from her position with plans of expanding her performance network to include New Thought churches across the country. During her time at CSL Denver, Susan has had the pleasure of performing with Cynthia James, Robin Hackett, Sheryl Renee, Robert Anderson, Amy Steinberg and Jana Stanfield. She has also worked with many guest speakers, relying upon her unique ability to find “just the right music” to support their messages.

“One Heart”  the SFCSL Music Ministry

Richard has been active as a song leader at Santa Fe CSL for most of the last eight years. Richard’s first formal voice training was in 1980 in the East Indian Carnatic tradition. In more recent years he has been getting professional coaching in the western tradition. He has participated in more than one choir along the way and has sung in some 17 different languages. He currently performs as a baritone in the Santa Fe Men’s Camerata. As a licensed Religious Science Practitioner he enjoys practicing the principle that heart and mind work hand in hand through musical expression.

Peggy says she can’t remember a time when she wasn’t singing and being coached by an older sister.  She sang her first solo in at three and started her formal vocal training at age fifteen at the Lamont School of Music at Denver University.  She continued her study of music in college as a music education major with a double minor in voice and piano.  Over the years she sang in several choirs and did solo work for various types of events.  The highlight of her career was passing the audition and being accepted into the Mile Hi Choir, where she served for seven years.  Five years ago, Peggy was in a serious car accident that left permanent damage to her vocal folds.  She says, “I feel blessed that Spirit has helped me heal so that I can sing again because I receive so much joy being a Song Leader at SFCSL”.