We come together with love and joy to express the One Divine Source within us all. 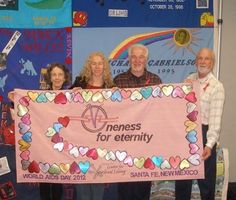 We are a loving community, providing spiritual tools for personal transformation, creating a world that works for everyone!  We honor all paths to God.

We offer a practical spiritual philosophy teaching that draws on the wisdom of the ages and New Thought principles to promote awakening and personal growth.

Whatever your lifestyle or spiritual path, you will feel welcomed.  Our spiritual community is ready to embrace, love, and accept you as you are.  We include everyone on their path to God!

If you are looking for a warm, dynamic, loving community of like-minded people, we invite you to visit Santa Fe Center for Spiritual Living and claim the life your soul is seeking.

We are your 21st Century Community for Spiritual Growth Our Center had a humble beginning in the early 1960s. Dick Gregory, a self-promoting salesman, was invited to attend a seminar about the Science of Mind in 1945. He became enthralled with the philosophy that Dr. Ernest Holmes was teaching throughout the country. When he moved to Santa Fe in the 1950s, he started distributing copies of the Science of Mind magazine, which was the only means that articulated the philosophy. By 1960, the distribution from a small downtown bookstore had reached 100 per month. At that time, an organization that chartered Science of Mind churches did not exist.

The readership of the magazine created enough interest for a discussion group that started in the early 1960s. The group, of about 16 members, had meetings at the downtown First National Bank and discussed the early publications that were distributed by the Science of Mind Institute, based in Los Angeles, California. In 1965, Dr. Robert Stevens, an ordained minister by Dr. Holmes, was invited to come to Santa Fe and instruct the study group. The group reached church status in 1967, and it became the Santa Fe Religious Science Church. It is affiliated with the United Church of Religious Science, the new name for the Science of Mind Institute.

We Practice Science of Mind

We are part of an international movement called Science of Mind. Science of Mind is a philosophy that was founded by Rev. Dr. Ernest Holmes, who, after studying many of the great religions of the world, realized that they were rooted in the same unifying themes of commonality.

We teach and practice a simple message:
Change your life one thought at a time

“The Science of Mind is the study of Life and the nature of the laws of thought; the conception that we live in a spiritual Universe; that God is in, through, around, and for us.”

What is New Thought

Once called the “religion of healthy-mindedness” by the philosopher William James, the New Thought movement was born almost 150 years ago as a revolt against the negative dogmas so prevalent in the churches of that day.

It was the ideas and writings of Ralph Waldo Emerson that caused the New Thought movement to be born, coupled with the prolific metaphysical healings of Phineas Parkhurst Quimby, the writings of Judge Thomas Troward added much, as well as the lessons and healings of Emma Curtis Hopkins.

All were strong influences on Ernest Holmes. The early New Thought Movement was driven by the discovery that physical healing was possible through the power of the mind and spiritual awareness. As that initial idea unfolded into a successful application, New Thought students began to see that the power of an uplifted consciousness could also bring healing to negative circumstances and conditions in one’s personal life.

As it evolves today, 21st century New Thought is driven by a far broader intention. Planetary healing through self-realization is emerging as the new promise of these teachings.

Who is Ernest Holmes?

Ernest Holmes 1887-1960
From time to time, we are blessed to know people of apparent genius, people whose insight, understanding, and love are influential in changing the thinking of whole generations, and whose impact will be felt for years to come.

Dr. Ernest Holmes was such a person. He began teaching in 1916 and founded the movement we know today as the Science of Mind and Spirit in 1927.

The philosophy is found in a textbook written by Dr. Holmes called The Science of Mind. It was first published in 1926 and revised in 1938.
Raised in New England in the 1800s, over time he was able to piece together the profound knowledge of many of the world’s greatest spiritual leaders and thinkers throughout history.

He studied science, philosophy, and religion, seeking out the greatest minds in each of these various fields. Throughout this investigation, his desire was to synthesize what he learned, to “put it all together” into one practical, usable philosophy that would lead to greater happiness, success, and prosperity in daily life. He achieved this goal.

Please subscribe to our weekly e-newsletter for all the latest news from Santa Fe CSL.